It’s been a busy week for Google’s GMail developers. They recently added free telephone voice calls and now they’ve introduced a new feature to save you from email overload.

A typical corporate user sends or receives an average of 110 messages per day and spends 8 hours per week dealing with their inbox. It’s a recognized cause of stress, can make people feel overwhelmed, and prevents them completing more important tasks. GMail’s new Priority Inbox could help you reduce the strain. It’s an experimental feature which is being rolled out to all users over the next few days. Look for a bright red “Priority Inbox” link at the top right of the page — you should see it soon.

Essentially, Priority Inbox is a junk mail filter in reverse. It recognizes important messages — such as those from your boss — and gives less priority to non-critical messages. Such as those from Bob in the Accounts who cc’s the whole company when the coffee machine’s empty.

As usual, Google has released a cheesy video to explain the concept:

Priority Inbox watches what you read and respond to. It learns over time and should become more efficient at sorting the critical from the trivial. The inbox is split into three sections — Important and unread, Starred and Everything else (you can configure them in GMail’s Settings): 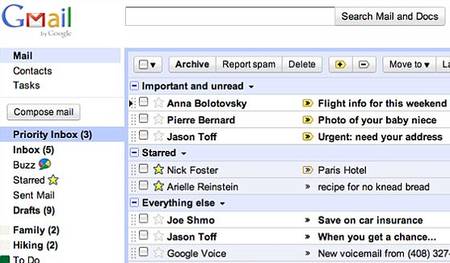 If the filter gets it wrong, you can mark a message as more or less important using the + and – buttons accordingly.

For more information, refer to The Priority Inbox page.

Will it save you from email overload?

Bad Behavior has blocked 708 access attempts in the last 7 days.